Hi there, how have you been? It’s been over 2 weeks since I last posted and it feel like forever. I had my mother and one of my nephews over from Iceland for a visit and that was such fun. I did work most of the time they were here but I still got some time with them every day of course so that was fun.

They were very lucky with the weather while they were here, we had sun and it actually even was a  little hot, around 17°C which is super warm for this time of year. Since they left however it has become abundantly clear that winter has come and is here to stay. We have had a lot of rain and chill in the air. But that’s ok, it’s winter after all.

Now I have been doing a lot of knitting and I have actually finished a lot of projects since the last time I posted, mostly socks. And I have also cast on a number of things. I always say that’s it, I’m not casting on anything new. I’m going to work through my pile of wips….but then I never do. I always see or hear of this new pattern and I can’t resist. I’m just hopeless so I guess what I should take from this is that I should never say “I’m not casting on anything new”! I’ll try to remember that.

Now on to show off my latest FOs. So some of those were already on the needles last time but are now finished.

First off are the Dragon’s Egg socks that I knit for my oldest. These are Harry Potter themed socks that were written for men so they are actually quite big even though I knit the smallest size. I also ended up playing a game of yarn chicken which I luckily won! But the thing was that the leg of the sock was so much longer than what I usually knit and I couldn’t really shorten it because of all the patterning. I think when I cast off, I had less than a meter left of yarn! Phew, that was a close call! Luckily my daughter loves her socks and that’s one more project off my Harry Potter knits. 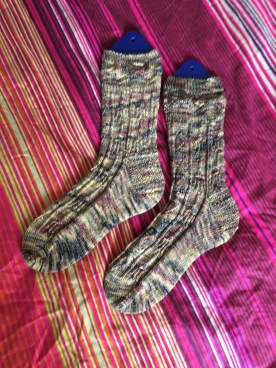 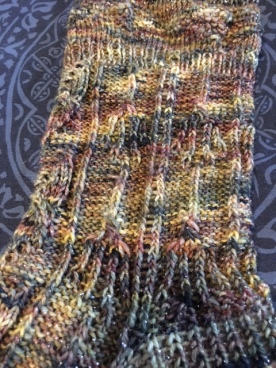 The yarn is not my own and I have discussed that in earlier posts so if you are interested in that you can browse my latests posts for info on that.

I had also cast on for a pair of Halloween socks for my youngest using one of my own hand dyed yarns in a colorway that I dyed up specially for Halloween. I finished those in time for Halloween so that was fun. I knit them toe up, no special pattern just a regular vanilla sock. 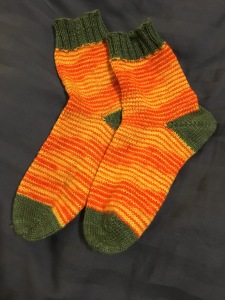 And then I cast on for a pair of socks for myself. I used yarn that I had gotten in this years Knitting in France Birthday Game. It was a DK weight yarn from Sirdar called Sirdar Snuggly baby bamboo. The content was 80% bamboo and 20% wool. I very rarely knit socks using DK yarn but this was fun as they were a quick knit. I had two 50gr balls, each had 95 meters/104 yards. As I’m not used to knitting socks in such a heavy yarn I was unsure if I’d have enough so I knit them toe up as that way I could just stop the cuff when I was about to be out of yarn and that worked out really nicely. Again no pattern really just from experience. I did knit a rib pattern on the leg, knit 3, purl 1 just for some added interest. 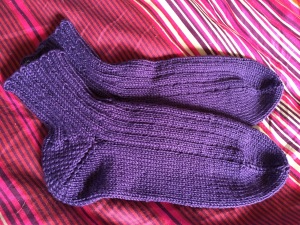 Then I made a pair of fingerless mittens and clearly this was knit with Christmas in mind. I had dyed up some of my Merino Light yarn, that’s a 100% merino single ply yarn that is super soft and a joy to knit with. However as it’s single ply and no nylon content, it would not be a good choice for socks so I decided a pair of mittens would be ideal. I found a pattern for mittens online and then adapted that to what I wanted and here they are: 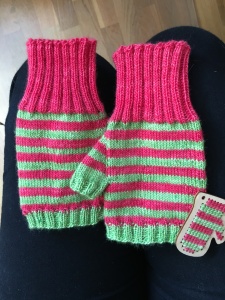 And next to them you can see a mini mitten ornament. I actually stitched that first I think, or was it the other way around? I’m not sure any more but either way, one influenced the other. I think the mittens are fun and the mini mitten ornament as well. I’m thinking I’ll use it as a Christmas tree decoration. 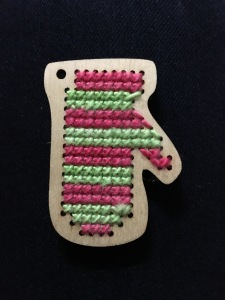 I bought a few of these mini wooden ornaments to stitch and I’m thinking I’ll make them into Christmas decorations.

The last project I’m going to share with you today is another pair of socks. Of course! But it’s not just ANY pair of socks! No, these are super special because they are knit using my own hand dyed yarn in a self striping color way! I dyed the yarn a while back and I only did 3 sets. Each set was made up of 2 50gr skeins so you could knit them two at a time. I kept one for myself, I gave one away in a giveaway and I think I sold the third. Anyway it had been sitting in my stash for a while and all of a sudden I thought I really should knit a pair of socks using that yarn and see how it would knit up. This yarn was a dyeing challenge for a number of reasons. First because I dyed two skeins rather than just one regular skein. This meant that I had to make sure that both skeins were exactly the same. Second because it was a self striping yarn and that means a lot more work than when dyeing any other kind of yarn. And I did not do all the stripes of the same length and I also had a number of colours rather than just to stripes of 2 or 3 colours. So a real challenge for me as a dyer.

I then decided to knit them using Susan B Andersons new sock pattern called the Smooth Operator Sock pattern which is especially designed for self striping yarns. It is basically a pattern for vanilla socks with an afterthought heel. Well, let me tell you that it worked out perfectly and I have been boasting about my success all over my social media! If you follow me on Instagram, Facebook or Twitter you are bound to have seen the pictures. But if you haven’t here they are and look how PERFECTLY my two socks match! I’m so proud of my dyeing!!!! 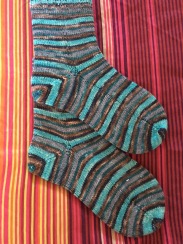 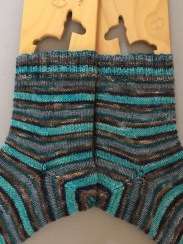 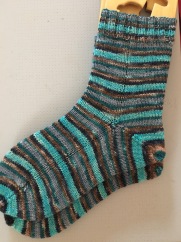 I really love the colorway and wish I had written down how I did this so I could repeat it. Unfortunately I did not so this truly is a one of a kind colorway. I still have enough left, I think, for a pair of shorty socks for my youngest. These by the way are for her also. I knit 60 stitches on 2.25mm needle.

The success on this colorway has inspired me to work with lots of colours and I want to try my hand at more self striping colorways for the shop and I have already begun dyeing some up and I have plans for more but I’ll tell you all about that in a later post as this is beginning to be on the longer side I feel.

So I think I’ll say goodbye for now. Thank you so much for stopping  by and spending some of your time with me and my knits. I hope you have enjoyed reading and looking at my pictures and that you will come back for more later on.

I wish you all a wonderful new week and I hope you have lots of time to work on your own knits. Take care 🙂