Hi there, I thought it was about time I told you more about my participation in Sock Madness.

If you are not familiar with this event, it is a speed knitting/sock knitting competition which is held once a year. This year is the 13th edition. Each year a very large number of sock knitters sign up to challenge themselves and others. To begin with each round is 14 days long but towards the end the rounds get shorter. Also the number of knitters that qualify for the next round goes down until only 1 knitter is left as the biggest winner.

This is the fourth time I take part. The very first time, I had incredible luck and actually made it to the very last round, round 7 before being eliminated. Then for two years in a row I was eliminated early on due to misunderstanding the pattern and so not knitting the sock correctly. Both times I was hugely disappointed and even wowed not to join again. Of course I have been unable to resist the temptation and always join!

This year the warm up pattern was called 13 Memories as this is year 13. This was a fun pattern mixing lace and scrap knitting. I really enjoyed choosing my yarns and I do love how my pair turned out. All the yarns I used were my own hand dyed yarns. 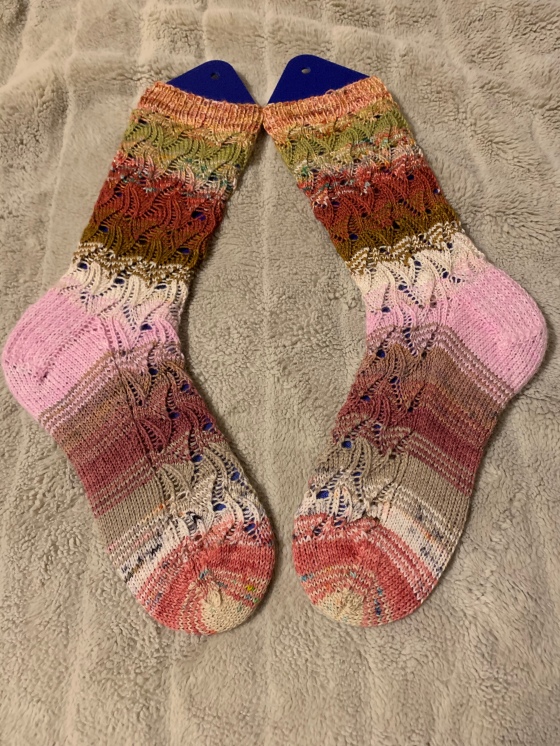 Then there was the qualifying round. This round serves to make up the teams. Knitters of similar speed and lifestyle are matched together. This way everyone has an equal chance of getting as far as possible in the competition. After this round, teams of 40 knitters each were created.

Each time we need to show that we have knit the required number of pattern repeats or rounds which is why you see the yellow yarn going through one of the socks above.

So that’s the end of the qualifying round. Beginning of round 1 we are a team of 40 knitters but only the 36 quickest knitters qualify for the next round.

This year the pattern for round 1 was a lace pattern with a particularity. The stitch pattern was not the same on both socks. There was one pattern for sock A and another for sock B. Now this had me a little unhappy as I felt they would not look good as a pair. We were allowed to knit each sock using a different yarn and I decided to do that in order to end up with two pairs rather than one. So I hurriedly knit one of each and once I was done and qualified for the next round I knit the other two. 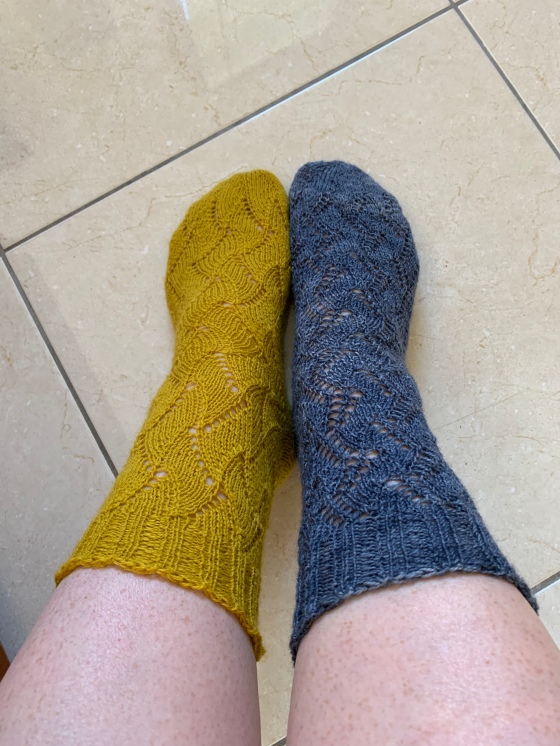 You can see the difference in stitch pattern here in the pictures above. The yellow sock is knit using Mondim yarn from Rosa Pomar in Portugal. The grey pair is my own hand dyed yarn.

And here you have my two finished pairs. 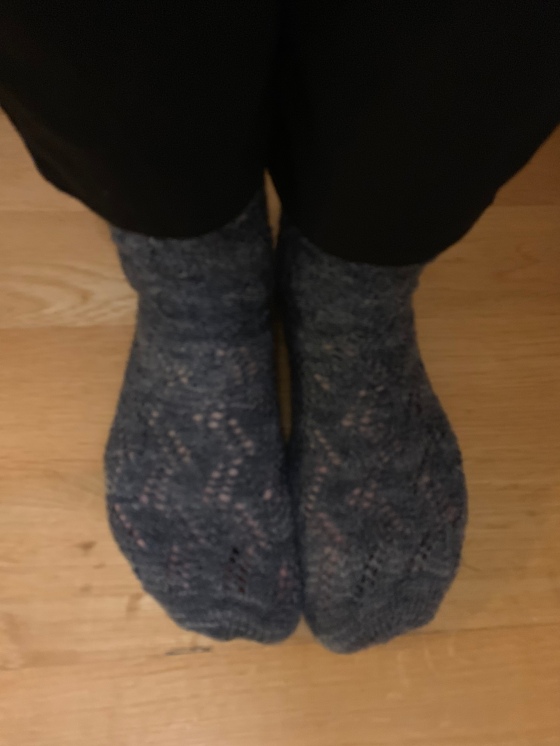 And now it was time for round 2. This time only the quickest 30 would qualify for the next round.

The pattern for round 2 was a very fun color work pattern. I chose to use my own hand dyed yarns and the contrast one was a self striping yarn which I feel made the end result even better. These may look daunting but really they were not and just so fun that they were super quick to make. 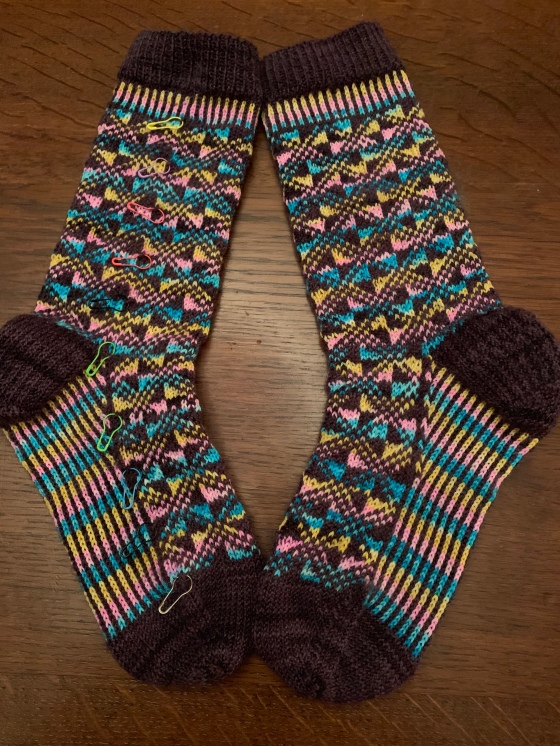 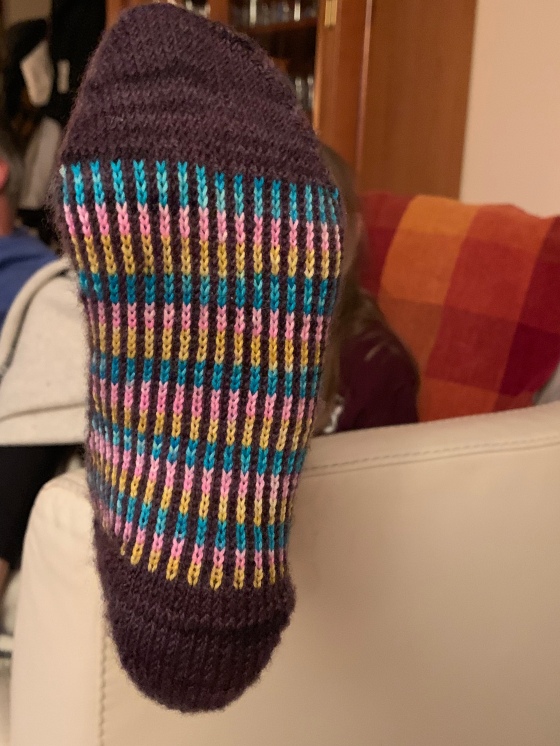 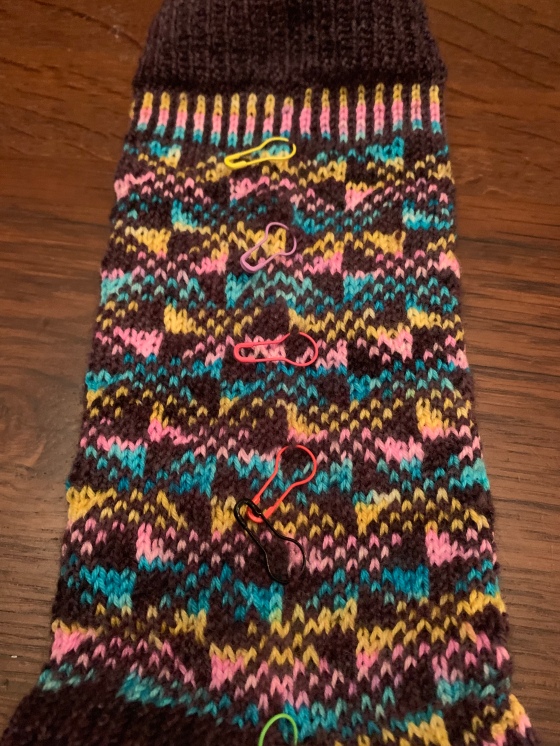 Color work socks are such fun!

Then there was round three. Again I chose to use my own hand dyed yarn. This time I chose a sock blank so the socks may look less polished. And this time only the 20 quickest would qualify for the next round. 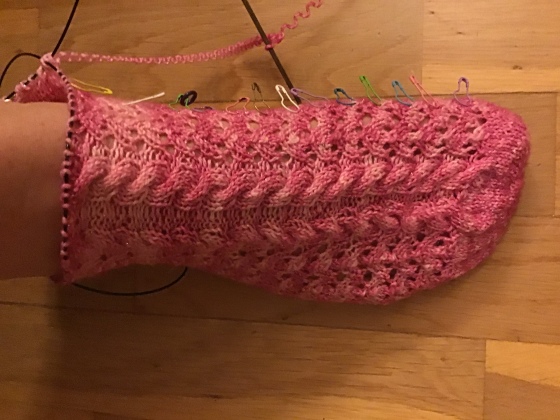 So now we are getting to round 4 which starts sometime next week. This time around only the quickest 10 will qualify for the next round, round 5 so things are definitely getting serious!

So far I have been finishing my pairs in about 4 days but that might to be quick enough for this upcoming round but we’ll see. I will of course keep you posted.

There is something to be said for this competition and even if I am knitting away feverishly alone in my corner of the world, it is fun to challenge myself. Also these patterns always teach me new things. This year I have done a new cast on and a new bind off. I also knit a new to me heel. Learning new techniques is definitely a plus.

So now you know a little more about Sock Madness and if you feel like taking part next year, you can look up the group Sock Madness Forever on Ravelry for more information.

That’s all for today. Thank you for stopping by and spending some of your time with me. I wish you a great weekend and hopefully you will get some quality knitting time in there.

Speak to you soon:)

One thought on “The Sock Madness adventure 2019”

I dyed up some minis today to use in my #battenburgblanket which will be white with pinks, corals and purples. It is so fun to do a little yarn dyeing again. #knittinginfrance #knittinginfranceyarn #crochetblanket #crochet #handdyedyarn
I have been led into a rabbit hole by the amazing @knittingvicariously and have now crochet 24 squares for my future #battenbergblanket using leftovers and minis. This is my 4!!!!! blanket currently in the making. #crochet #crochetblanket #scrappyproject #sockyarnblanket #knittingvicariouslypodcast
I managed to finish two projects this weekend. A pair of shorty socks and a pillow. Both patterns are mine. #knitting #knittingaddict #knittinginspiration #knittinginfrance
I managed to finish two pairs of socks yesterday. The first is a pair of handspun socks. The second is the first pattern from @curioushandmade #secretsocksociety3 using yarn from @the_yarn_lab_uk . Should have plenty of knitting time in the coming weeks swing as I lost my job today! Thoug not easy to concentrate while I recover from the shock of loosing my job after 16 years! #knitting #sockknitting #knittinginspiration