HI there, how are you? It’s been a while, way too long actually. I got busy at work and then getting ready for a long trip. As I’m writing this I’m actually in sunny California where I will be staying for a little while. I’m working as usual and after work I’m helping my brother with his girls. It’s been a long time since I saw them so spending some time with them is a treat.

Before leaving home, I was super busy finishing important knitting projects. Two of which were test knits. 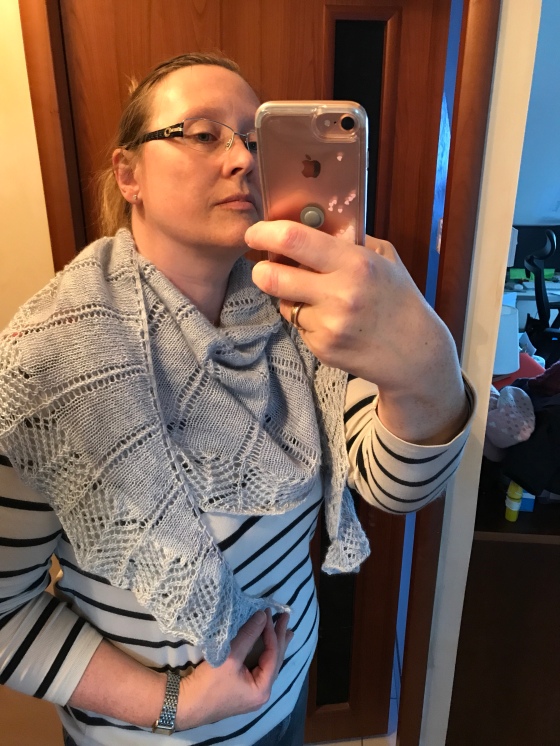 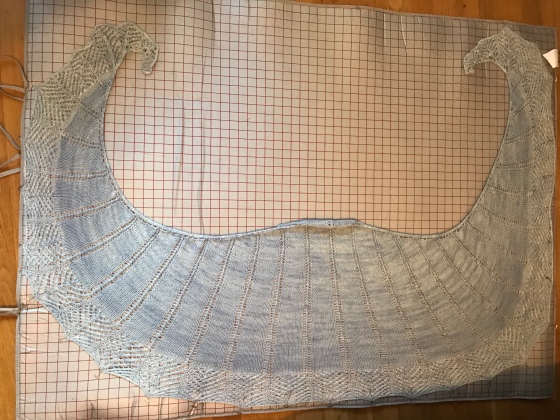 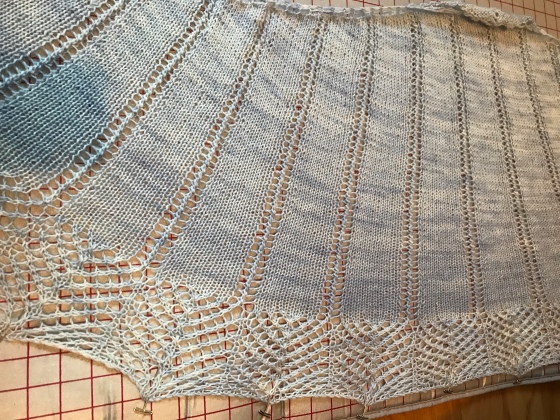 The pattern repeat is simple and it has a lovely lace border. It is also huge!

My second test knit was for a cropped sweater and that pattern has now been released. It is called Akane and the designer is called Eri. 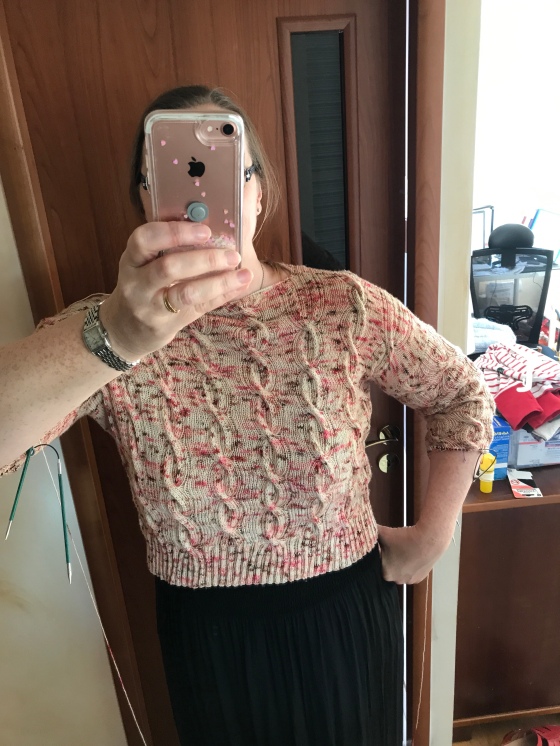 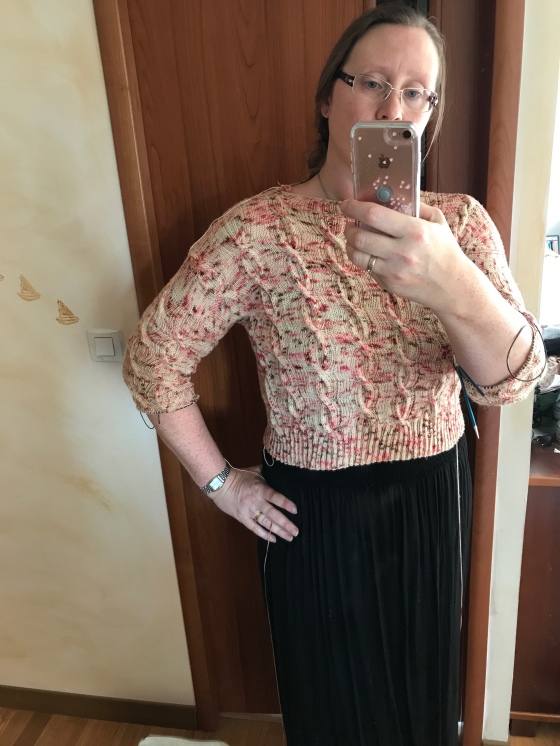 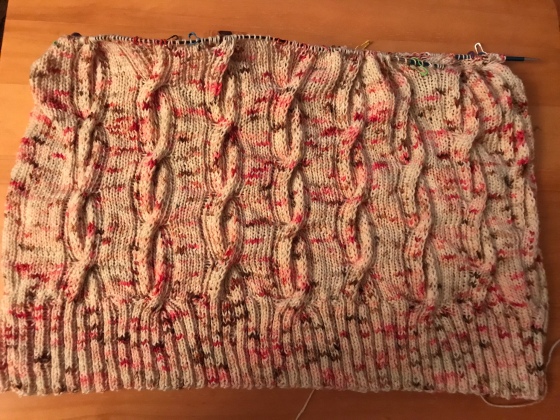 I also managed to almost finish my colorwork cardigan, the Flea cardigan by Pinneguri. When I get back home I just need to knit the button bands and STEEK! That will be very exciting and I’m already thinking of my next colorwork cardigan. 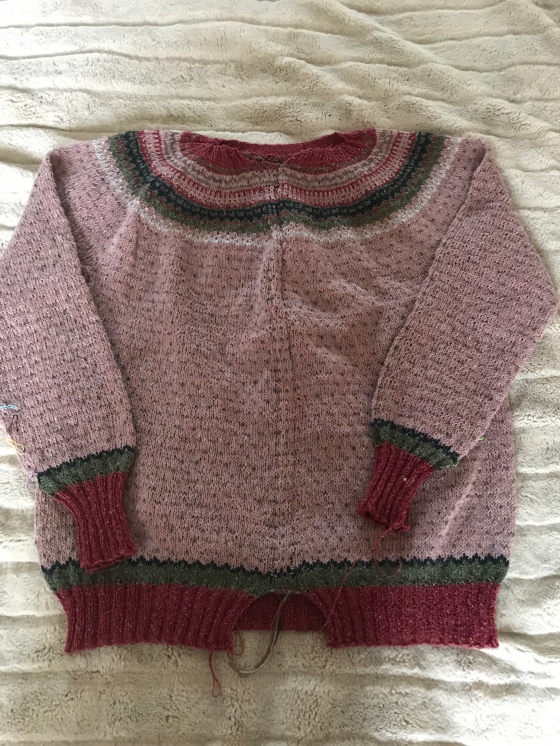 I knit this using Holst Garn in a wool/silk blend and really enjoyed working with this yarn.

So these three projects were my main focus before leaving for the US. Everything else was put on hold.

Now I’m working on another test knit, a cardigan again in a DK yarn. This is an exciting project for Making Stories. I’m not allowed to show any revealing pictures but it I’m using a special Italian yarn and I chose a grey color. I’m just at the separation for the sleeves. The construction is interesting and as this is Knit on 4 mm needles it grows nicely.

I’m also doing Sock Madness again. This is my third year. The first year I was put in the fastest team and made it to the last round although I did not win. Last year I was in the second fastest team I think but was disqualified after 5 rounds out of 7 I believe because I misunderstood a colorwork pattern. That was a huge disappointment. I actually knit the socks twice because at one time I realized it was not correct. The second time I was sure everything was correct but unfortunately I misread the charts and so my pattern did not come out right. I was so sad I thought maybe I would never join again. But the competitive spirit got the better of me and I joined again.

The qualifying round is on now. I did manage to make a mistake on my second sock and had to rip back about half a sock but that’s ok. I had decided I would take my time with the first pair so that I would end up in a less speedy team and so maybe have a better chance of staying in the game longer. So I cast on March 1st and I finished last night or March 6th. This was a fun pattern and I can see myself tweaking it a bit and knitting a second pair. The qualifying round is running to March 14th I believe and after that all the participants that finished a pair will be divided into teams, depending on speed and from then on we will compete against our team mates each round. Each round will get shorter and less people will qualify for the following round and so forth until the end. It is a little crazy but also a lot of fun.

This means that the first real competition round will start while I’m away from home. Before leaving we had received the list of materials for each pattern but I could not take everything with me so I took all the tools and 4-5 yarns so now I just hope the pattern will arrive BEFORE my flight home so I can make good use of all those flight hours.

But enough of chatting, here are my socks for the qualifying round 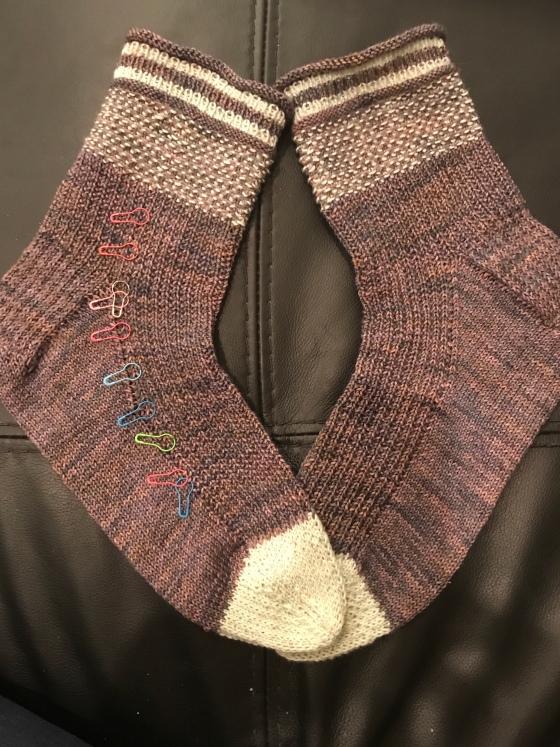 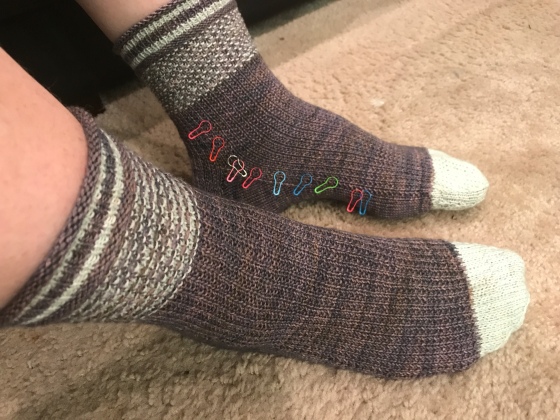 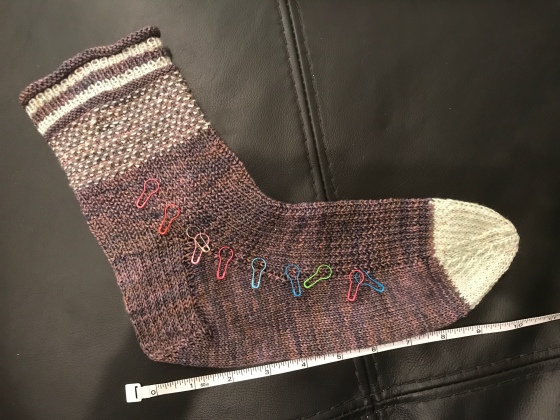 I used my own hand dyed SOX yarn for the main color and a pale green from Baerenwolle for the contrast.

That’s all for now I think. This week I will concentrate on my test knit cardigan and also work on my February socks from Helen Stewart’s Sock Society and the March socks from Mina Phillips sock club.

Thank you for stopping by and I hope you have enjoyed seeing my work. I hope to be back next week with more knitting. Until then have a great week and happy knitting:)