Hi there, how are you today? Did you get much knitting done this past week? I did some, not a lot. I feel like I’m making such limited progress these days. I just don’t have the time or maybe I’m working on too many projects at once, if that’s a thing. I’m not sure.

I do know that I have a lot of things going. I think I have 5 pairs of socks on the needles that I’m actually knitting on (way more in my mountain of wips), I have one wrap and one child size cardigan and one cowl. So I do have a lot to choose from. The cowl and the child cardigan are both test knits and I need to finish those in November. I can show you the cardigan but not the cowl just yet.

So the cardigan will be part of a book that I think will be published next year. I was going to use my own yarn but I didn’t have  just the right thickness so I went with something from my stash. its called Rooster Almerino baby – the yarn that is. The pattern can be knit as either a pullover or a cardigan and I chose to do the cardigan and I’m knitting it for my youngest. I don’t have enough for a single color cardigan so I’m going to use 2 or even 3 colors and I think that will be fun. I’m very close to finishing the body. Then I have the sleeves, collar and button bands to do. 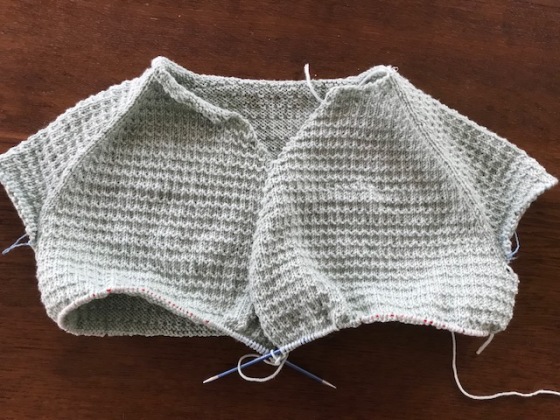 This is not where I’m at now, I have made good progress since I took this picture actually. I like the stitch pattern and it keeps the knitting interesting. The color is a very light green and it looks very nice. My daughter loves it.

For the socks, I haven’t really made any significant progress so no pictures today. I have though started on pair number 3 for Marie Curie and this time I’m using a blue tweed contrasting yarn for the cuff, heels and toes and it’s funny how it changes the main yarn. It really brings out the blue in the Marie Curie yarn so I feel like I’m knitting on something totally different and that is good because knitting 4 pairs of vanilla socks in a row using the same yarn can get boring. I’m thinking I might do the last pair, pair number 4, with some white – their yarn/colors are yellow, blue and green. (I’ll show a picture a bit further down in this post of the sock so you can see how it is knitting up with the blue cuff). I don’t have any more of the yellow contrast yarn I used in the first two pairs and I only have a little bit of this blue tweed yarn… I think. I might need to go stash diving though just to be sure because it does look good. AND it’s Stash Appreciation time! So I should go stash diving and use some of my “old” yarns.

I have created a thread in my Ravelry group for the Stash Appreciation project that is running as of now and until January 31st so if you are interested in joining please do. I’d love to hear what you might knit and see a picture of your yarn. I’m going to knit a sweater using some older hand spun yarn but I haven’t started yet. I feel like I need to finish the test knit cowl before I can start anything that big. i also want to knit some Christmas socks from one of my special Christmas yarns and again I think I need to finish at least pair 3 for Marie Curie before casting that on. I’m afraid if I cast on for new things now, I might not finish what I need to finish, in time.

On to other things. I have tested a few new things lately and I need to share that with you. First, the knitting needles.

I bought some new knitting needles after hearing about them on social media. The first pair was a fixed circular from LYKKE. Everyone is talking about those and I really wanted to try them out. This is a Norwegian brand but the needles are manufactured India from driftwood. I was expecting them to feel somewhat like wooden needles, a feel similar to Indian Lake Artisans needles for example but they feel super slick and sort of “plasticky” and I’m pretty sure that is not a word. 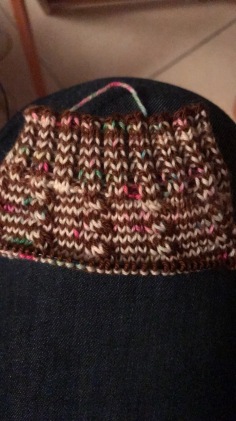 I bought two pairs, a 2.25mm and 3.50mm and I”m currently knitting a sock with the 2.25mm ones – the sock you see on the picture to the right. So back to the needles. They don’t feel like wooden needles so that was a surprise to me. They are however very nice to use. The yarn glides beautifully and they feel good in my hands so I can understand how popular they are. They are not however a game changer for me, I mean that I’m not going to go overboard and buy their entire collection to only use theirs. But they are nice so if you have been wanting to give them a go I’d say go ahead. I’m pretty sure you will like them.

The other set of needles I bought were meant for sock and sleeve knitting. I saw those somewhere and thought they looked so exotic and I just had to give them a go. These are the Addi CrasyTrio needles. As the name indicates, they come in sets of 3 needles.

First I need to say that when I knit socks, I  use circulars 90% of the time. I either do magic loop or a 9″ circular. These needles are more directed towards the knitters that prefer knitting socks with two shorter circulars at a time. They actually look very much like the Neko needles except the Addi needles have  a tiny cord between the needle tips whereas the Neko needles are all plastic (no cord at all). This does make the Addi’s easier to manipulate I think. And they are definitely sturdier. I have only knit two pairs with the Neko needles and they come in sets of 4 needles – you only knit with three but they give one extra. And I broke two needles out of 4 without even noticing and I lost a bunch of stitches so that put me off those for a while. Although I must say the customer service was excellent and they sent me replacement needles.

But back to Addi. I have knit one sock and am on the second one (although not from the same pair) and I must say that the beginning was not fun. The needles come with an instructional booklet and a sock recipe. I followed the instructions for casting on over two needles and then taking one out so you have half of the stitches on each. Well that was just impossible to do! I struggled until everything was off and then cast on again over just one needle and then transferred half the stitches over to needle two. The very first row was fiddly but after that it was fine. If you usually use two circulars rather than magic loop or a 9″ I’m sure you would like these. I however like the flow of knitting on q 9″ and so so stopping and turning my work around seems tedious to me now. Also when knitting the needle points click on each other making noise so this is not an option for me if watching the tv with my family:)

I’m going to finish my two pairs I started with on these but I’m not convinced they will be used much. I do want to try them on a sleeve though and maybe I will like that better. Who knows. Anyway it was very interesting to try out.

You may know, or not, that when I began my online knitting shop I specialised in knitting needles. I sold all kinds of knitting needles, different styles and materials. I was the first to ever sell Hiya Hiya, Kollage, Indian Lake Artisans, Knit Stix, Swallow, Signature Needle Arts and more brands here in France and in some cases even in Europe.

Would you be interested in me doing a series of post about knitting needles? If anyone is interested I could maybe put something together and share my thoughts on different styles and brands etc. Leave me a comment below and let me know.

One more thing before I leave today. I don’t know why I have waited to the very last minute to do this properly, but I have just got my first really good looking yarn ball bands! Now my yarns can look really professional I think.

I love my new label. With the future of the shop so uncertain I don’t know if I will get to use them but at least they will be a nice souvenir and I can still use them on my own personal yarn and when I dye yarn for friends and family.

I’ll be back later this week with an update on my potato peel dye experiment. Also there will be an update on the shop on the Future of Knitting in France pages- both the English and French one very soon. Not the news I was hoping to share this week but well.

Until next time, I hope you have a great rest of your week. Enjoy your crafting and thank you for stopping  by:)