Hi there, how are you? It’s been two weeks since my last post. I’m sorry I didn’t write anything last week and I’m sure you wondered what that was all about. Well it was all about Sock Madness!

After knitting the qualifying pair of socks, I ended up in THE fastest team! I immediately got a lump in my stomach and regretted having been so ultra competitive. I should have taken more time to finish but hey! So I’m in a team called Amaranth Zebu – don’t ask me what that means, I have no idea 🙂

So the pattern for round 1 came last Monday and I was sure, for some reason, it wouldn’t arrive until later that week so I spent Monday morning knitting on other things. At noon I discovered the pattern was there and I panicked! I immediately cast on and there was no stopping me! I knit like crazy and finished my pair in 4 days! The round is open for 14 days but just knowing that I’m with some crazy speedy knitters made me worried and I could not imagine dropping out after only one round! And so I made it to round 2!

Now only “problem” there is that I’m going to Iceland with my kids beginning of April and I’m crossing fingers and toes and hoping that the second pattern will arrive BEFORE I leave so I can work on them there. If it doesn’t, it means it will arrive while I’m away from home and if I want to stay in the game, I will have to bring a ton of yarn with me because you never know which pattern is coming next! Before the start of the competition we get a list of materials needed for each pattern so we can prepare and have everything ready to go. But if I’m not home when the pattern comes, well that’s complicated!

So I’m stressing about that now. Hopefully it will arrive before I leave and all will be good! But here’s my finished pair for round 1

The pattern repeat is easily memorizable. It is knit using two contrasting colored yarns. I chose two different bases also, the burgundy one is on my Sox base and the yellow one is on the same base as my POP only it has black nepps instead of the colored ones. I think these go together really well.

The stitch pattern is quite stretchy. Also the heel construction was totally new to me and I think it makes for a “bigger” heel, that is more rows so when I finished the socks ended up being a little big for me. But the colours aren’t “manly” enough for me to give them to my son so I’m going to keep them anyway.

So once the socks were off my needles I went back to knitting on my secret test knit cardigan. I’m only 6 rows from casting off the body now and I hope to do that today and start on sleeve one. I’m supposed to finish early next week and I’ll do my best to keep the deadline although I think I may need a few more extra days. Also I’m not able to just knit on one thing so of course I cast on for a shawl! I’m doing the Ramble shawl by Andrea Mowry. It’s half garter and half brioche. At the moment I’m on the garter portion. It’s knit using two yarns and I’m using a gradient yarn I handspun and then a hand dyed yarn. I originally chose Chai Latte from Knit Cosmic Strings which is a beige and brown yarn but it ended up being too close in color to the lightest color of my gradient so the two color stripes in the garter section didn’t show up. It was all just sort of one color so I ripped back and chose another yarn I had wound up and works really nice. It’s Smooshy from Dream in Color in the Beach Fog colorway and this time the two yarns really contrast each other. I haven’t knit much so far so no picture of my progress yet but here is my handspun yarn and a picture of the pattern with the two yarns I originally chose. 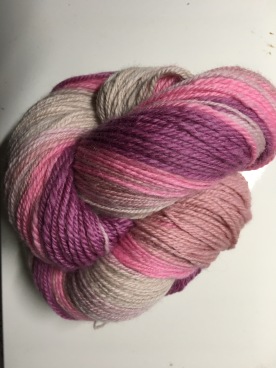 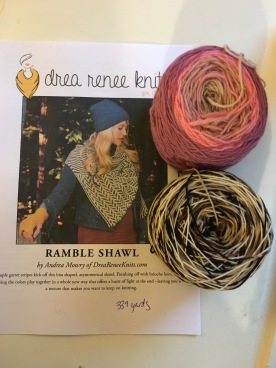 I really love the brioche portion of this shawl and look forward to getting there in my knitting.

Another project I’m preparing is the Sammal cardigan by Joji Locatelli. I’m going to knit it with my handspun yarn that I spun as part of the sweater spin organized by Andre Sue Knits and Sue of Legazy Fibre Arts. It’s been awhile since I finished the yarn and I was holding of dyeing it. It felt a bit overwhelming because the yarn was so special. I’d spent so much time making it and I had chosen a gorgeous pattern and so the dyeing had to be just so. Also I didn’t know what color to dye and then this weekend I finally took a decision. It would be grey! And so I dyed my yarn in a light grey color and luckily the weather here in Normandy was glorious this past weekend so the yarn dried up nicely in my garden and last night I wound one of the skeins into a  ball to swatch.

Now swatching is not an everyday occurrence for me. I rarely swatch for anything. But as I’m using handspun yarn which is not 100% even like commercially spun yarn, I felt swatching was a must. Not to mention the fact that knitting an intricate cardigan in handspun yarn only to find out it doesn’t fit…well that was just not an option. 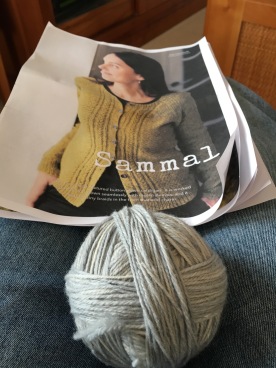 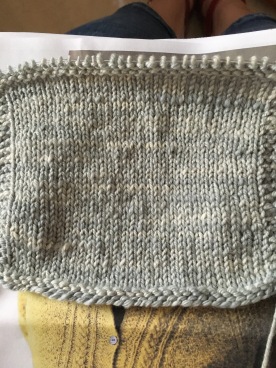 So I knit up a swatch last night and washed it before going to bed so today I’m going to check the gauge and if it doesn’t fit then redo my swatch. I didn’t cut the yarn because I don’t know how many swatches I may need to do and I’m afraid I might run out of yarn which would be a catastrophe!

So this is going to be my next cast on, after I finish my test knit cardigan. I’m planning on taking this with me on Easter vacation to Iceland and knit on this and the future Sock Madness socks while I’m there.

That’s about all I think for now. The weather here is beautiful today and it is supposed to be gorgeous all the time until the weekend of course! But then bad weather on weekends is never all bad for us knitters as it’s just ideal for cozy knitting inside:)

I wish you a wonderful and productive week. I hope you will have nice weather and lots of quality knitting time. I’ll be back next week for more news on my knitting and soon ( in April) there will be another Maker of the Month feature and April’s maker is a yarn dyer so lots to look forward to!