It’s time I told you about my mountain of wips. A while ago I was inspired to do something about this after watching Jilly of the Knitting Broomstick talking about how she tackled hers.

I keep a part of my stash in my bedroom and that’s also where my Mountain of Wips has been formed. It wasn’t on purpose, it just sort of happened with time.

I’m constantly working on a million projects at the same time and constantly giving in to the urge for a new cast on. Then there are projects that must be done or maybe there is a deadline and so other things are put aside for a few days which then turn into weeks and even months. Little by little the pile grows and grows until it has taken on a life of its own it would seem.

My pile had just taken on this ugly image of a pile of bags of all kinds and just looked messy and unorganised…which it totally was. I also knew that I might not want to knit everything that was in there. And I also new that some of the bags did not contain wips but projects to be – a skein of yarn, a pattern and a needle. Ready for me to cast on. But somehow I just hadn’t gotten to do so. 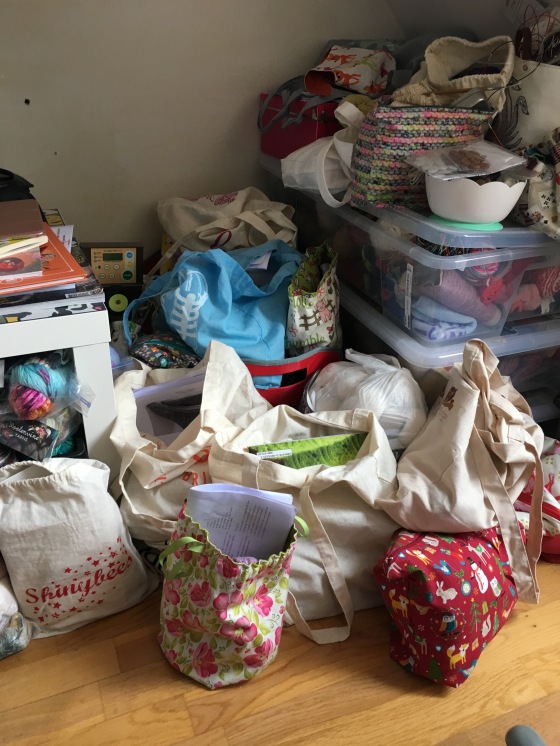 The plastic boxes on the right house part of my stash and as you can see there are a number of project bags all over!

There was no method to this madness so I just took one bag at a time and looked at its content. If it was an actual work in progress I then decided if I wanted to finish it or rip it out. I admit I only ripped out very few wips.

All the bags containing “to be knit” projects were emptied. I put the yarn back into the stash box and put the pattern aside for future use and the needles back in my bag of needles.

I wanted my pile of wips to be just that, no piles of ready to go knits. I don’t need those. I just get everything ready when and if I want to cast something on.

So after going through all the project bags this is what I ended up with. 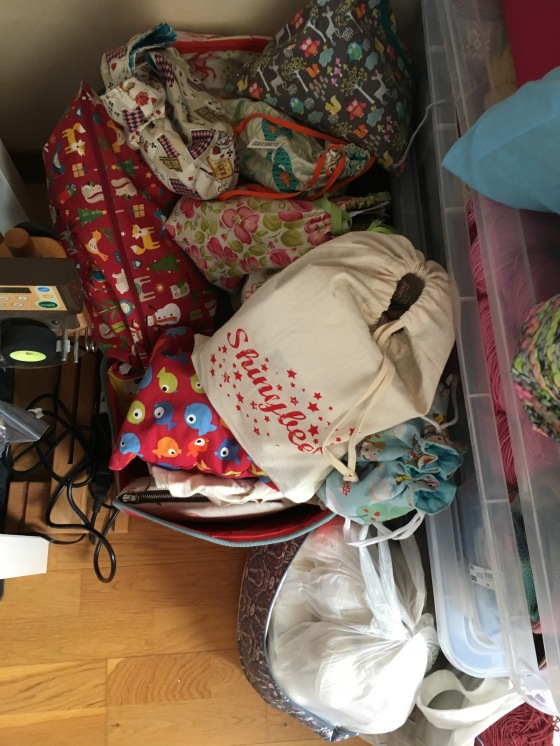 It’s not a very good picture but at least you see there is now only one project bag on the floor. The rest fits in my bin. (since the picture was taken I have added one big “to be knit” bag but it doesn’t count because it is a necessity for Sock Madness).

As for the contents of the remaining project bags, here’s the list:

2 pairs of gloves – one is fingerless and it is my oldest wip ever!

1 pull over – which is sooo close to being done!

10 pairs of socks! Yep that’s right, 10! Most of those are half done, that is one sock done and the other only just started.

I have decided that I now need to work on a wip at all times. I’m allowed to cast on for new stuff BUT I also have to choose a wip and work on concurrently. This way my Mountain which is now back to being a pile will slowly turn into just an extra project bag or two. (It’s ok to dream).

It may not look like much of an improvement when you compare the two pictures, but it actually is! I now know what I have waiting and getting all this done is no longer overwhelming. I know I can and want to do it. It’s just going to take time but that’s ok. Knitting is  supposed to be fun and that’s how I like it.

As I’m writing this Sock Madness 11th edition has just launched which means that my knitting time will be concentrated on that and nothing else will be worked on except in between rounds but when that is done, I’ll be back to working on my pile of wips.

So you also have a mountain/pile of wips that needs sorting and working on? Or have you maybe already gone through it and come out a winner? I’d love to hear your thoughts on the matter and how you organise yourself. Please share by leaving a comment below.

That’s it for today. Have a great weekend and until next time, Happy Knitting!

14 thoughts on “The Mountain of Wips”