Hi there, how are you today? I hope you are doing good and that you had a nice weekend.

My weekend passed way quicker than I would have liked. I did get some knitting done yesterday though and that was nice. Lately I’ve been very much a semi monogamous knitter focusing most of my time and attention on the Audrey cardigan by Jane Richmond. This weekend I worked on that too and I should be finishing it this week.

I also continue working on the Harry Potter inspired stockinette scarf for my daughter. Luckily I’m knitting it in Aran weight yarn on 5.00mm/US8 needles so it does go quickly and so I usually get 4-5 inches done each time I pick it up. I have sort of left it for tv watching at night as I’m not super passionate about all this straight stockinette but little by little I’m getting there. I think I might be about 10″ short of having half the scarf done. I need to keep at it because as my daughter reminds me, I do have a ton of other Harry Potter inspired knits to do!

Last week I also picked up a  sock that I began in August but has been left in my huge basket of “wips and soon to be cast on”. It’s a pattern called Falling Leaves and it is by Nancy Whitman. It is a very simple and elegant pattern using twisted stitches. The cuff has a beautiful leaf design but otherwise it is pretty straight forward. I’m knitting it using a merino and bamboo yarn I dyed myself a while back. This is a gorgeous base, super soft and a joy to work with. I think I have just a skein or two left in the shop and I ‘m thinking I should order some more because this is a really nice yarn. Here is where I’m at currently: 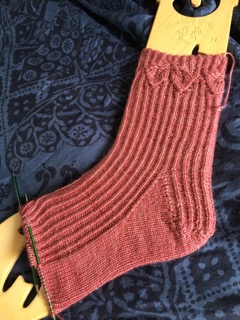 I also cast on for yet another project. This time a test knit for a shawl that was designed using my Cash’Sock base. This pattern will be published soon and the designer was kind enough to let me join the test knitters. I’m of course knitting it in my Cash’Sock base and as soon as the pattern is released I’ll be sharing pictures and more info with you on that.

But like I said my main focus has been on the Audrey cardigan. Last week I actually finished the first sleeve. But I really didn’t like it. It was much too wide and just didn’t look good so I ripped the whole thing out! Not a happy thing to do but I’m really glad I did. I then reknit the first sleeve using fewer stitches. The body of the sweater is knit in one size bigger than what I should have chosen so instead of being fitted it is quite large. When reknitting the sleeve I chose the next size down and that works perfectly. I’ve now completed the first sleeve and am close to half done with the second I think.

I’ve ordered a bunch of buttons online. I wasn’t sure what would look best with this cardigan so I’m excited for those to arrive and choose the right ones. Actually I’m really excited about finishing this cardigan and actually starting to wear it. It is a very simple pattern I think I will get lots of wear out of it. I did knit it in a size too big but that should still be ok. Also, I knit the sleeves longer than the pattern called for. Because my version will not be fitted I will be using my as a layer on top of short and/or long sleeved t-shirts and so I wanted the sleeves to be longer. I’m pretty sure I’ll knit a second Audrey and when I do, I will follow the pattern!

I’m kind of obsessed with the idea of knitting cardigans and sweaters at the moment. And it ‘s not necessarily a good thing because that means more casting on when I have this huge basket of wips just waiting for me to give them some love and FINISH them off! Usually I multitask and I knit on a number of things at a time. I also feel like I used to get more done or that I knit more than what I’m doing these days. And so now I find myself with this huge pile I’ve created and it consists of HOs and wips AND “to cast on” – projects I decided to do this summer and got the yarn wound, printed out the pattern, found the needles and notions and put everything nicely into a project bag ready to be knit. Only they haven’t been knit yet. And still I’m thinking/dreaming of new cast ons rather than tackling those that are already there ready and waiting! Don’t know whats wrong with me!!!

And so in the same line of crazy thinking, last Friday I was feeling very excited about a new project. It was my birthday and I decided I’d dye up some yarn  for myself and use to knit a new cardigan of course.

I felt like dyeing lace weight yarn that I will then knit held double. I used two base yarns, both a mix of merino and silk so super soft. And one of the blends has silver stellina for some glitz!

I decided to dye one yarn in a semi solid grey 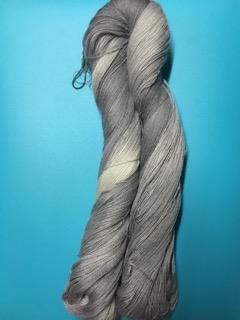 This is the merino and silk base and then I dyed the merino/silk/stellina base as a variegated yarn using lots of different colours. I used 4 colours per skein but due to the technique involved some of those blended into yet another colour. I dyed each skein individually and used different colours so none of the 3 skeins I dyed looks the same. 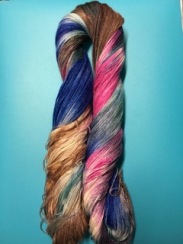 I think this will make the project even more fun. So I have 3 semi solid grey skeins and 3 variegated skeins which should be more than enough for a cardigan.

At first I had thought of doing the Jih sweater by Isabelle Kramer which is actually written for lace weight yarn held double – hence my inspiration for dyeing lace weight yarn.

But now I’m not so sure. I’m rather leaning towards Dexter which is a cardigan also designed by Isabelle Kramer. Or maybe even the Madewell by Joji. I have a ton of patterns in my Ravelry library that I want to knit…. But still; I’m 90% sure I’ll be doing the Dexter cardigan.

So what do you think of my pattern and yarn choice? Do you think the grey+variegated will look good? Or am I delusional?

Are you working on a garment at the moment? I’d love to hear/see what you are knitting/crocheting these days.

That’s all for today. Thank you for stopping by and spending some time with me today. I hope you will have a wonderful new week and may it bring you lots of knitting time and happiness:)

3 thoughts on “Progress and some selfish birthday dyeing”