Hi there, how are you today? Fine I hope. I’m so happy it’s Friday and I’m going to have 2 days off from work. I’m not doing anything in particular this weekend but I will do a bit of dyeing as I have a request for a custom order for some gorgeous yarn so this weekend I’ll experiment with color and see if I can get the colour the client is hoping for. Also I hope I’ll get a bit of quiet time to knit some.

This week has been quite productive in fact as I finished 3 pairs of socks and I finally finished the Come What May shawl by Susan B Anderson that had been waiting for WEEKS for me to just do a beaded cast off. The pattern calls it a Russian Beaded Bind Off and I think the name just scared me, I thought it was going to be complicated and I had to watch some tutos on YouTube etc. But in fact it was super simple! Well, I’m really happy with the outcome. I have even blocked the shawl and it looks real nice.

The yarn is a gradient from Knitcircus yarns. I think the colorway is called Tidepool or something like that. When I look at the shawl like this, it makes me think of the beach. The top, beige part reminds me of the sand and then the color changes are like that place where the sea just rolls over the sand and then it ends with nothing but sea/water. I might be overly poetic here but basically I really love how the yarn knit up in this shawl.

I used nr 6 glass beads for the bind off and I think they give a really nice finish to the shawl and add a little bit of weight which I think makes the shawl sit beautifully on the shoulders. Any way it was great to just get this done and off my wip table.

I also finished knitting 2 pairs of socks with my handspun yarn. They all ended up being fraternal socks. The yarn is self striping but some parts were mostly yellow/orange and others mostly red/purple. But that’s ok, I don’t mind and neither does my daughter. And I’m just so happy to have knit them with yarn that I made myself! There is something extra special to knitting with one’s own handspun yarn I feel.

So once the two pairs were done I cast on for a pair of tube socks for a kid – either my youngest or some of her friends (depends if I manage to knit 4 pairs by April 1st). And here’s a picture these last 3 pairs

I used an Almerino Rooster Aran yarn for the tube socks.

So this brings my total of pairs of socks this month to 5! I’m waiting for round 2 of Sock Madness to be launched and so I was trying hard to hold myself back and NOT cast on yet another pair as I know that round 2 is just around the corner and I’ll need to concentrate on that once the pattern is released but…. I was only able to hold back until today! I cast on just now for a new pair and I’m using yarn I bought through the Golden Skein. It’s a self striping yarn from Scrumptious Purl. 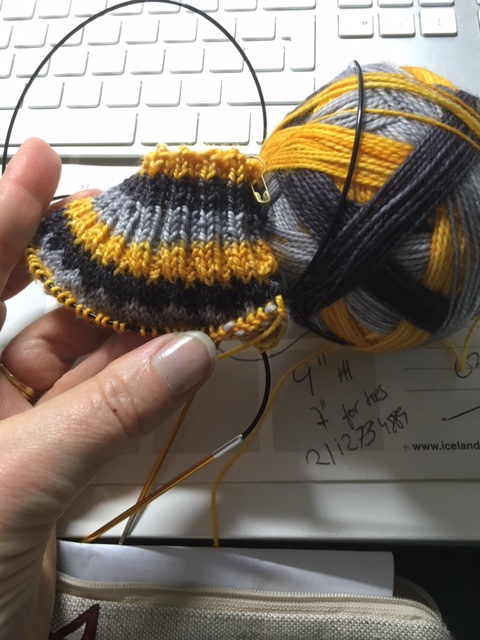 As you can see I only just cast on but I’m already liking the outcome.

Another thing I cast on this week was the KITSUNE sweater by Amanita – a pattern I won in an Instagram game. I dyed up some yarn (and I hope I dyed up enough because I did not write anything down so I’ll never be able to replicate if I need more yarn). I chose a new base which is a DK weight 100% superwash merino with a high twist. The yarn is super soft and a true joy to knit with and the stitch definition is just perfect! I’ll need to dye up some more of that for the shop so you too can give it a try. 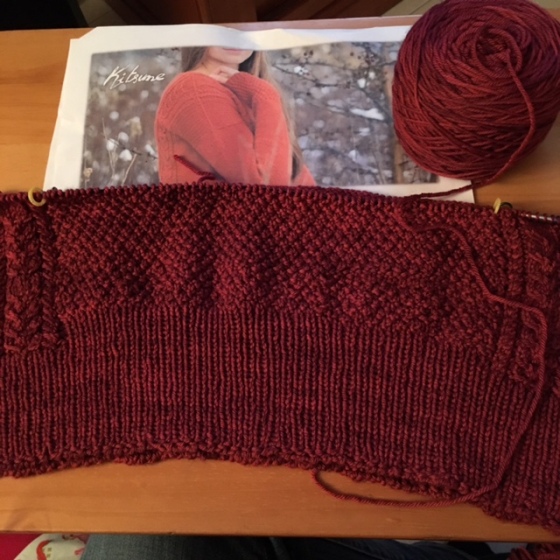 I’m not far along but I can already see that this will be a great sweater. I love the color of the yarn and I enjoy the pattern. I did make a mistake right after the ribbing and kept on doing ribbing instead of doing the 1) k1, p1 *2) k1,p1* 3) p1,k1*4)p1, k1 and you can see that if you look closely. I was too lazy/excited so I just could not get myself to rip back and fix but rather let it be and I’m calling it my little “customisation” 🙂

I already had 1 sweater and 1 cardi on my needles but that’s not going to stop me from casting on a new sweater obviously:)

Now on to you ! First I’d like to say thank you to everyone that participated in the Nancy Whitman giveaway last Friday. I’m super happy to see so many comments and this is the most popular giveaway I’ve done so far! So thank you to all!

Before I announce the lucky winners, I was wondering if any of you would be interested in doing a Nancy Whitman kal? Not right now because there are so many kals going on at the moment (and I’m too busy to participate/organise just now) but rather this summer. I’m thinking about doing a summer kal running from June 1st to August 31. Also I’m thinking of a rather open kal, what I mean is that instead of everyone knitting on the same pattern, the requirement would be to knit any one of her patterns. That way we can all choose the one we want to knit. What do you think of that? I might also do a special discount for the participants in the kal if anyone wanted to buy some supplies and or yarn for the kal in my shop. If there is interest, I’ll look into that and announce later.

I would open threads in my Ravelry group, one for chatter and pictures of progress and one for FOs and I’m thinking we could do a drawing for a prize at the end of the kal. That could be fun don’t you think? I could donate some yarn, handmade accessories, discount code to the shop for example and maybe I can get someone else to donate something too. I think the number of prizes will depend on the participation and once we decide if we go ahead with the kal I’ll be able to take a serious look at prizes and announce them before the kal begins as an added incentive for you to join in the fun:) Let me know what you think, is this something you would be interested in doing with me?

And now the moment of truth, the moment you have all been waiting for, the announcement of the 2 lucky winners which will each win their pattern of choice (the one mentioned in their comment) from Nancy Whitman’s Ravelry store. I used random.org to draw the winners and, drumroll please, here goes:

Winner number 1 is Lisa Hackman or Betheyarn on Ravelry and she has won the Ganz pattern. A great choice! So congratulations Lisa and thank you for participating. I’ll be letting Nancy know and she will gift you the pattern as soon as she can.

And winner number 2 is Tari or Captnswife on Ravelry and she has won the New Slant pattern from Nancy. Again congratulations Tari and thank you for participating. I’ll be letting Nancy know and she’ll gift you the pattern shortly.

To all the others, I’m sorry I could not give you all a prize but not to worry. I have more giveaways coming and the next in line is also pattern related but more on that later. In the meantime, have a wonderful weekend and thanks for stopping by today:)