Hi there, I hope you are doing good. Today the weather in Normandy is very nice and it feels a little bit like spring is not far away which seems to lift my spirit:)

Now I have done some knitting since last time. I finished a pair of socks, a cast on for a new pair and I finally picked back up one of my shawls that’s been abandoned for a few weeks. I know I wasn’t supposed to cast on anything new until I made a real dent in my wips but…. You know me, I can’t resist especially where socks are concerned. I just really need a small project to pick up and knit somewhat mindlessly on.

So first here are the pictures of my finished pair of socks. They are part of the #Knitfromstash2016 kal that I’m doing with the Addicted to Sock Knitting group ( a group of sock knitters on Facebook and Ravelry). The patterns are by Heatherly Walker and each month we get one or two patterns. The idea is for us to knit at least 12 pairs during the year using her patterns and yarn from our stash. Of course I do have some problems keeping to using my stash but I am dedicated to do all 12 patterns this year. Last year I probably only did 2-3 although I did knit a  lot of socks but for some reason I wasn’t really doing this kal.

I knit these in the smallest size and gave them to my youngest. The lace pattern is easily memorisable and enjoyable to knit so these were a quick knit.

A couple of days after finishing these I cast on for a new pair because I had NO socks on my needles! This time I’m using my hand dyed yarn on the SPARKLES base and I don’t really have a pattern, I just make it up as I go. I cast on 60 stitches and I’m using twisted stitches – a pattern of p3, K1tbl and it’s looking nice I think. I could have been more adventurous and actually done something with the twisted stitches, like have them travel around, make a pattern or a cable but… I guess I just needed something super simple that I can knit on even at work and just put down and pick up all the time without that being a problem. 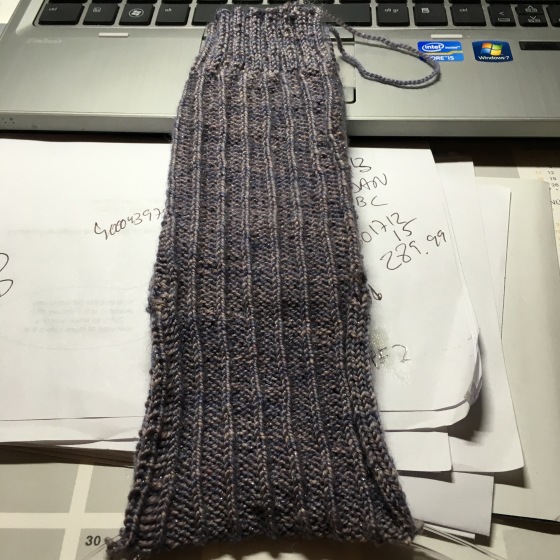 The picture doesn’t really do them justice but you get the idea. So I cast on yesterday and I’m knitting them magic loop stile, one at a time. I’m already half way to the toe now so I think I’ll finish the first sock today even.

And then there is the shawl, the Love of Spiders shawl by Melanie Berg that I actually cast on end of December and then abandoned sometime beginning of January! Why? I don’t know. What I do know now is that it was a very bad idea! So I had just begun what is called “section 2” on the shawl which is a patterned section and I had done a few repeats and thought it looked nice. When I picked the shawl up again and read the pattern, somehow I understood the directions totally differently and thus the result was …well nothing like what I had done before.

Look at the last few rows (top of picture) and you will see the drastic difference in pattern. So I ripped back all the way to “section 1” and began again, this time my pattern was also very different and I was not able to have the stitches follow the written pattern and so I ripped back a second time. I then knit the section for the third time and yet again I was not happy so I ripped back AGAIN.

Now that was going to be my very final round because I couldn’t take any more ripping back. So I carefully counted my stitches (3 times) and reread all the instructions and off I went! This time, the stitch count matches, I’m pretty sure I’m following the pattern correctly but the result is totally different from my first attempt. So I have come to the conclusion that the first time around I was totally misunderstanding the instructions and just basically inventing my own stitch pattern. So I’m just going to forget about that and continue what I’m doing. So here is what this section looks like now.

l hope it is correct. I can’t bear to think it might not be. So I’m just going to continue on and finish as soon as I possibly can to then go on to my  Come What May shawl by Susan B Anderson shawl that has been waiting now for months and the only thing left there is the Russian beaded bind off! And once these two shawls are done I’ll return to my Angelus Novus shawl by Renée Callahan of East London Knits. That one is more recent and in its early stages. And then of course there’s my sweater and cardigan that are both around 55% done. Ouff!

And yet, as I lay awake in my bed last night, in the middle of the night and not able to fall back asleep. I picked up my mobile and went on Facebook. There I read something about a Kal called Sock Madness so I went to Ravelry to find out more and I actually ended up signing up for this. Are you doing the Sock Madness challenge/competition or have you ever done it?

So from what I gather this is a sock knitting competition. It begins March 1st and if you want to join you still have time. They close registration on February 29th I believe. And so at least the first time you get 2 weeks to knit a pair of socks. After that the make teams, depending on how fast one knits and as the competition continues, less and less knitters will be competing in each team until there is only one knitter per team. There will be 10 socks to knit and they have already published the list of materials needed for each one. The patterns are released as they are to be knit so always a surprise.

The challenge goes on I think until May 1st or so, so this is a true competition and challenge and I did hesitate about signing up and wondered if I would be able to make it. But then I thought, hey I knit socks all the time so why not?! And now I’m in! Next step will be to print out the list of materials and get everything ready to go by March 1st. I’ll keep you posted on how this works out for me of course.

That’s all for today. I need to get going so I can knit a bit on my shawl before I have to be at work. So enjoy your week and if the second winner of the last giveaway does not contact me this week, I will be making a second drawing next week from the entries so stay tuned as you just might be a belated winner:)

6 thoughts on “A new week and some sock madness”