Again it has been way too long since my last post and I feel like I have a ton of things to share with you. I might have to do this in two different posts but I feel like doing it all now as I never seem to have the time to blog regularly. So we’ll see.

First of all, I participated in the first ever

show and that was a total blast. The show was well organised, housed in the Brighton Corn Exchange Dome which was a very nice location and well situated in Brighton. All the vendors were super exciting, high quality companies and had I not been bound to my stand I probably would have spent a gazillion pounds buying supplies from them all! So lucky for my purse that I did have a stand to tend to 🙂

I arrived there on Friday and set up early Saturday morning. The show was a two day thing and I believe the attendance was way better than the organisers had hoped for and Saturday especially was a super busy day. Many people attended classes as well and  I thought it was a great idea to combine classes with the market place. Everyone I chatted to was very happy with both their classes and the market place and I enjoyed meeting new people and was super happy to learn that some of them were already clients of my online shop and hopefully the others will be in the future.

I had a small stand, actually a half stand and the other half was occupied by Polo and Co which is another French company selling hand dyed yarns. The organisers had placed all the French sellers together so I met some new people in the business in France such as Amy from L’Oisive Thé, Sylvie from Polo and Co and Marion from (V)ilaines. I also met Jacky from Soak, a girl from Sweet Georgia, the Skein Queen, Ysolda Teague, Jenni from Fyberspates to mention a few.

Preparing for a show is always a dilemma, what should I bring and what not?? I brought hand spun and hand dyed yarns, knitting needles and stitch markers. The stitch markers were a huge hit especially the “stitch maker bar” where people could plunge their hand in basket full of colourful stitch markers of all kinds and pay per marker they then placed in a cute little plastic bag. People just kept coming for more of those so that was definitely a good idea I had there.

At times my stand attracted so many customers I did not know where to place myself so they could see everything and that is a great thing! I really got super boosted from all the positive feedback and the show has given me the punch I needed to continue and do even better. I had some great ideas to boost the business and offer you new and interesting items. You will be seing more fibre preparations for spinning as well as kits both for spinning as well as for knitting and crochet. Some of the kits will be Ysolda Teague patterns with my hand dyed yarns others will be from French designer Mzell’Flo for instance. These are all exciting new adventures that I hope you will enjoy.

Here are some pictures from my stand at the Unwind Brighton show: 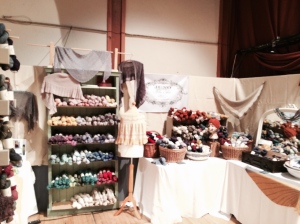 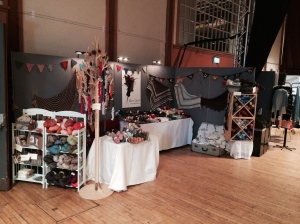 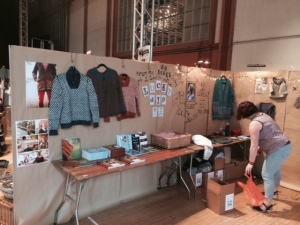 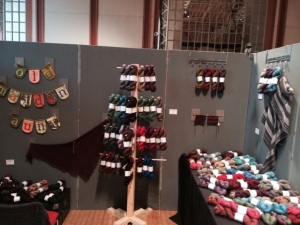 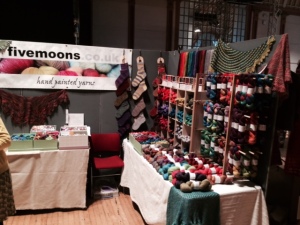 As you can see there were a lot of beautiful things to be tempted by!

Since returning home I have begun to work on all my new ideas for the shop. I have order the yarn for my kits, I have received my project bags which will be included with the kits and I have receive my new drum carder to make wonderful batts for spinning. I’ve also continued to make some hand spun yarns and have hand carded some rolags/punis for spinning multicoloured/self striping yarns. Here are some photos of those: 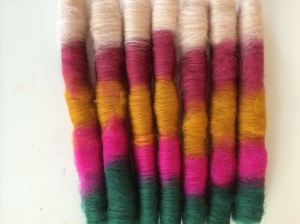 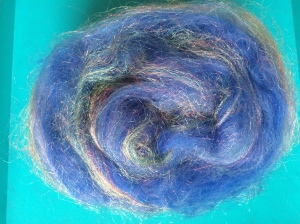 This is my first ever batt:) 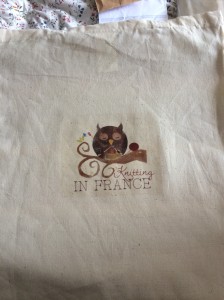 My new project bags with my logo:)

During my holidays I did some hand spinning on a hand spindle I purchased from Spin City – and her spindles are a joy not only for the eye but to use as well. This is the first time I actually got the hang of it and I’m almost done spinning a small batt on one of the spindles I bought from her. I have to take some pictures of those and show you. I also did some knitting and I’m doing the twisted stitch socks from Knitty and I’ve finished one sock and am half way through with the second one. I’m using one of my sparkly hand dyed yarns: 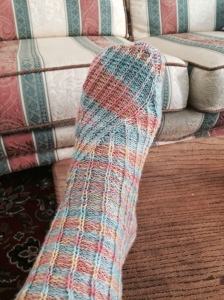 Well that’s about it for the moment. I’ll be back with photos of my spindles from Spin City and my progress on spindling and also with some more info and photos of the new kits to come. As for the shop, I’ve done some re-organising and will now be focusing on items that I make myself. I have thus created a section called “Clearance” where you’ll find all the knitting needles as well as some other commercial supplies at a greatly discounted price and I hope to sell these quickly to make space and finance some of the exciting projects I have in mind for the autumn. So do go take a look at the shop and spread the word among your crafty friends and take advantage of the Clearance section to stock up on quality supplies at a low price. Happy shopping here