Hi there, it’s been quite a while since my last post. I’ve been super busy and still am but I’ve decided I absolutely needed to post today and show you what I have been up to lately.

First off I casted on for the second Enchanted Mesa by Stephen West, this time for my daughter.  She wanted similar colours to mine but when I went online to order the yarn I found myself buying mostly blues. Three colours are the same as in my sweater and the rest are not. I did not want her to have an identical sweater. This time I also changed the pattern by changing the placement of the second sleeve. In the first one I followed the pattern to a t and at the same time thinking it would be nice to tweak it and have the sleeves placed more or less at the same level. This time around I did just that and so far so good. Of course I will not be able to judge until the sweater is finished but I’m confident it will look nice even like this. Here are some progress photos for you to see: 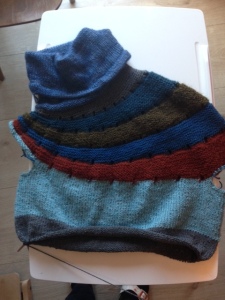 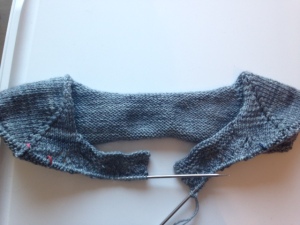 The second picture shows a close up of the lace pattern on the front. This cardigan is worked from the top down with raglan sleeves and so NOW SEWING.

One one of my browsing sessions on Ravelry I discovered this incredible japanese/english online webzine which is not only great but free – you only pay for the patterns you wish to buy. The magazine is called Amirisu and can be consulted here I feel the patterns are refreshing and a little different from what we mostly see. Take a look and judge by yourself 🙂

I have also been working on building my stock for Unwind Brighton for the last two days I’ve been preparing stitch markers and needle stoppers and yesterday I also made a few buttons using ceramic “dots” which I find beautiful. These will of course be delicate buttons so if you put them on an item you should handwash and maybe have the item inside out for further protection.  I’m also going to use the ceramic dots to make some stitch markers. I bought a ton of those and I just love the colours and feel these will make original products. I’m also working on magnets. I’m intrigued by the use of magnets in crafting and am working on making some pattern tamers and stuff. I bought different formats and am now thinking about different uses and ways to use them. I try different things and hopefully I will end up with something original, fun and useful at the same time.

And I almost forgot, I did some plying also last week, here are the pictures: 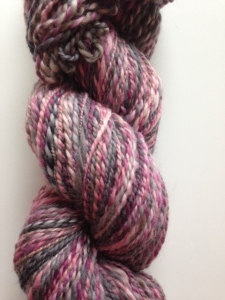 Well that’s all for now. Lots of crafty time and fun until next time 🙂